The Ereky Research Group (PPCU, Budapest) studied the pilot technologies of foreign governments and international organizations, using comparable criteria, thus exploring the limits, method and standards of pilots in the field of administration.

Present project is an EU funded research, led by associate professor Balázs Gerencsér, in 2011-2013. The main objective of the research is the revitalization of modelling in the administrative reforms. Pilot projects in Hungary are traditionally linked to prof. Zoltán Magyary (1888-1945) who organized model experiments in the thirties, the results of which, however, could not implemented due to the nazi and communist regimes following World War II. Model experiments also emerged after the democratic change of Hungary which took place in 1989, however, it did not become a widely used instrument. The lack of knowledge leads to neglect, and for the very same reason, it often gives rise to misguided attempts. However, there is no source related to pilot projects in public administration in Hungarian scientific literature at present, while references are scarce in foreign literature as well. The applicability and limitations of this instrument have not been developed untill this reseach.

Researchers involved in the project were coordinated individually, since both the subject of research and the methodology was unusual. The authors examined subject matters specifically selected for their research. Doctoral students processed the individual samples, which were reviewed, synthesized and analysed by senior researchers. Although each chapter is the result of independent work, regular and close cooperation of the authors was necessary to finish the research and gain new scientific insights in this new scientific area. The methodology of "teamwork" and the regular workshops are not unique to the projects of the Ereky Research Group, since earlier multi-author research has already proven this method to be successful [Role of Prosecutors outside the criminal law (2012)].

Volume I contained the synthesizing papers and an overwiew on the research project.

Volume II. is more empiric: all the in-depth analysed surveys can be found. Moreover, in Chapter IV and V of this Volume we gathered the findings of the two-year-long research project, such is the notion and applicability of pilots in Public Administration. The answers we found at the end of the research are unique in the literature for the time being, as no such cohesive research available on usage of Pilot projects in Public Administration Management. 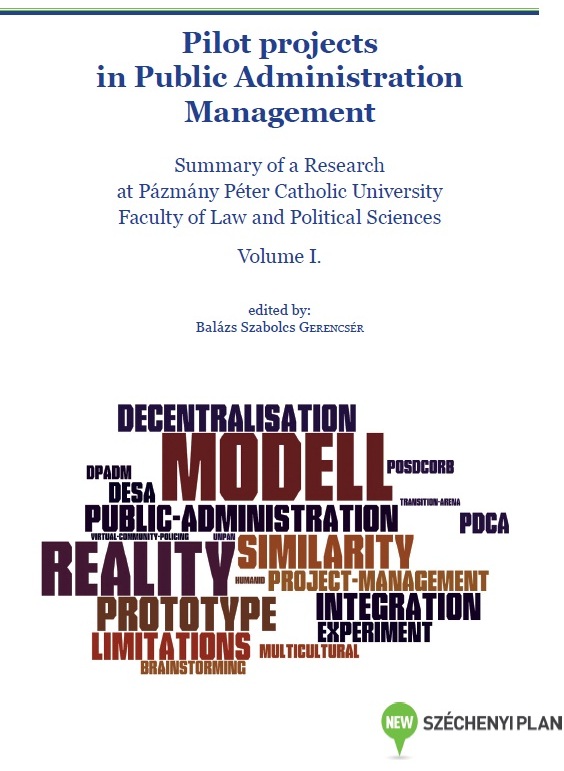